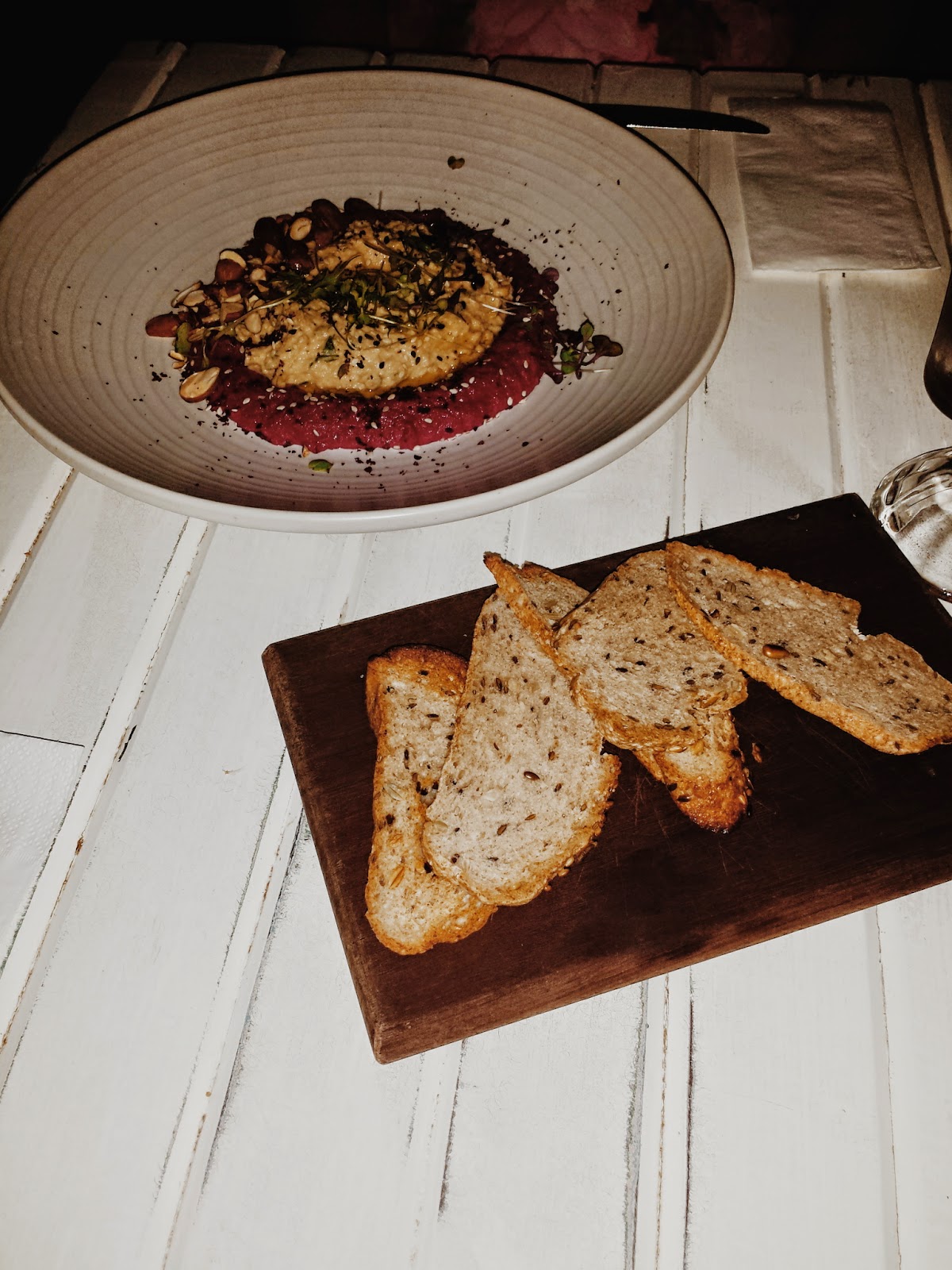 The Raw Kitchen Fremantle has been my go to place for delicious lunches anytime I'm down in the Freo area, for quite a while. Recently it moved in to a much larger Restaurant and began opening for dinner's. It now has an extended menu that will blow your mind, great service and a nice fresh vibe. The building they have chosen is an original 1920's warehouse with an abundance of natural light and raw exposed brick walls. They've also stuck with the freo nautical theme and architecturally placed and retro-fitted a number of shipping containers around the venue. 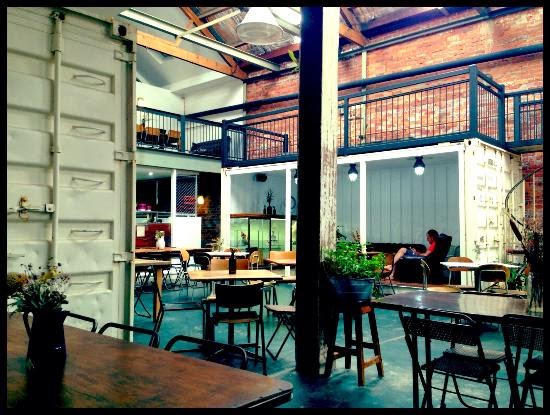 With the new venue has come a new menu, which in my mind includes the best hommus on menu in Perth. When you do get along to the Raw Kitchen under the entrees menu you will see "roasted beetroot dip & house-made hommus w/ cold-smoked almonds, black
& white sesame, micro herbs and your choice of bread." Purchase it and devour it with as much as excitement "ahhhsss" & "yummmsssss" as I do each time I eat it. There are three breads to choose from to accompany the dish or you can select a side of the raw nacho chips. I'd recommenced a serve of bread and a serve of the raw nachos chips as it is a large serving of hommus/beetroot dip.
For me this delicious fresh creamy hommus combined with the delicious earthy flavour of the beetroot dip gets 4.75 chickpeas out of 5.
Please do yourself a favour and get down to the Raw Kitchen as soon as you can for a meal, you won't regret it.
The Raw Kitchen: http://www.therawkitchen.com.au/the-raw-kitchen/
Menu: http://static.squarespace.com/static/53d3ae02e4b08d13cf4026e7/t/5420e8b1e4b0381477a4a4a2/1411442865946/Menu.pdf 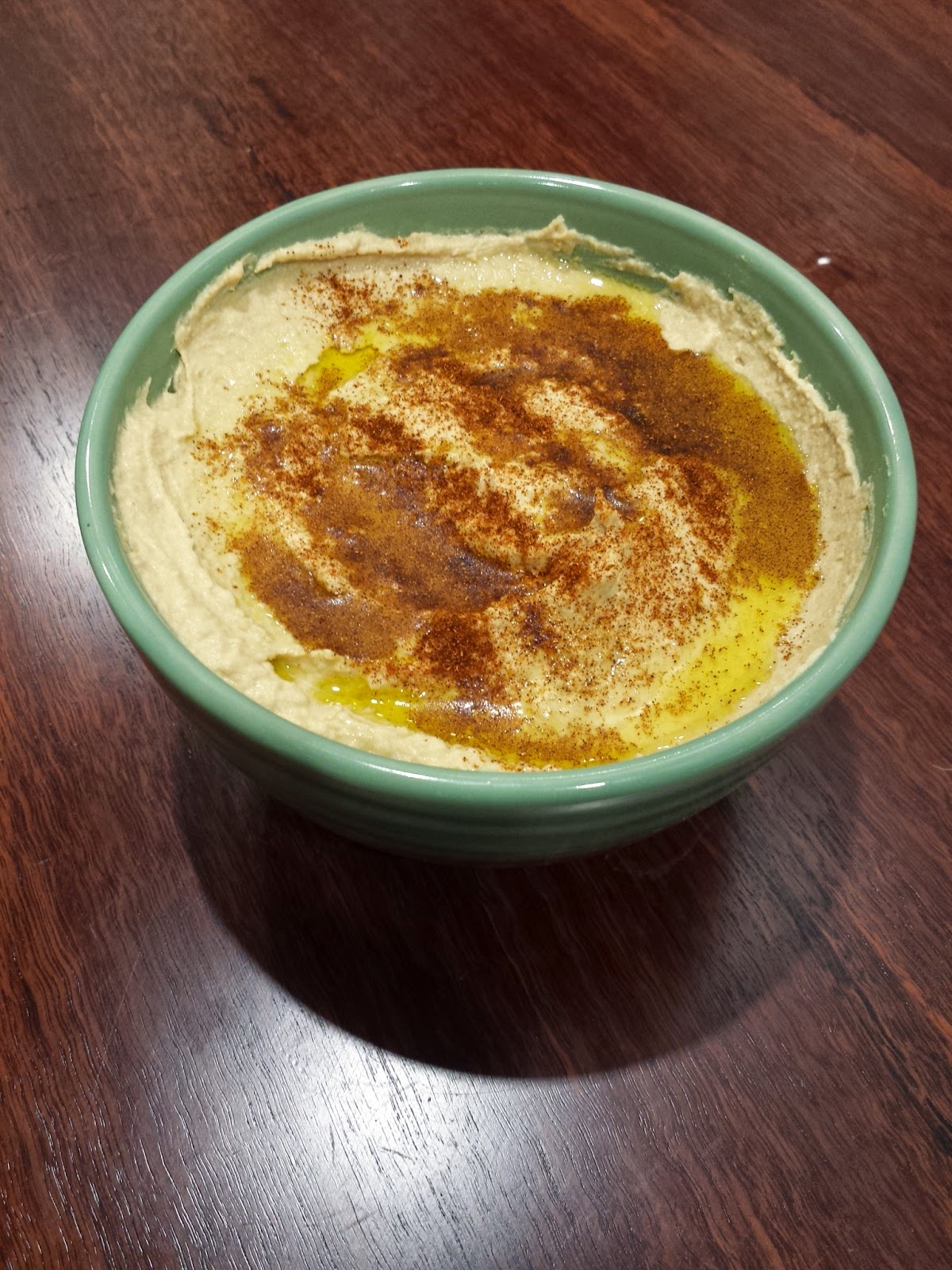 Hi Guys. It has been a while since we've added anything to the blog. So I thought I'd start contributing to the world of hommus/hummus again. Here's a little recipe that my mum uses for quick simple hommus. Of course you can use dried chickpeas and soak them over night for a more authentic hommus, but when you have people coming over and you need something in a rush this is perfect.

Ingredients:
2 Tins of chickpeas
2 teaspoons of fresh diced garlic  (if you use the minced garlic in a jar, double it)
2 large Tablespoons of Tahini
1 Tablespoon of olive oil
1 teaspoon of balsamic vinegar
A decent sprinkle of salt
And as much water as you need to make it a good consistency. Add say ¼ cup to start.
If you want to add some spice add tobasco or jalapenos to the mix.

Directions:Drain chickpeas, place in blender.
Dice garlic and add to blender with Tahini, olive oil, balsamic, and water.
Blend until a decent consistency, add further water if need be.
Once a good consistency add salt and further balsamic to taste.
I usually add olive oil and some smoked paprika to the top of the hommus once I’ve put it in a serving bowl.
It’s yum. It’s my mum's recipe. 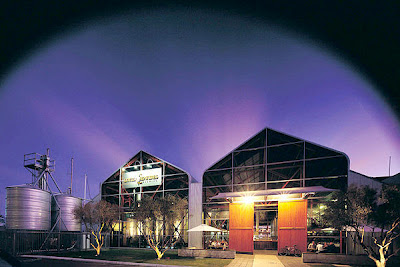 The Thursday just gone, I had a friend from the east coast in town and thought I'd take him down to Fremantle to check it out do the tourist thing. We decided to grab some lunch at Little Creatures Brewery. I'd been there a few times but never noticed that they had hommus on the menu. 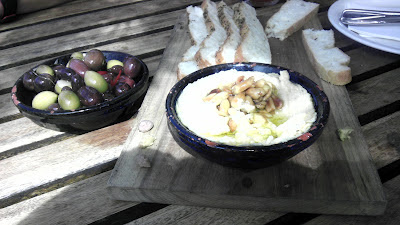 So as soon as I saw hommus on the menu, I ordered it. Little Creatures do a decent range of food for lunch and dinner and there's usually a few dishes that can be made vegan friendly.
The hommus came out served with roasted peanuts and peanut oil. It tasted very light, similar consistency to the Source hommus. So I don't think there is a lot of tahini used in the recipe, but unfortunately it also seemed to lack a sufficient amount of garlic. In all the hommus was still a worthy purchase, it had a nice smooth texture and was easy to eat not too heavy. It didn't quite have the kick or zest I like in my hommus but I still enjoyed it.
We also got a small bowl of marinated olives along with the hommus which was a nice addition.
If you're down in Freo head along to Little Creatures and get a bowl of their hommus while you relax on the harbour and enjoy the views.
3.75 chickpeas out of 5. 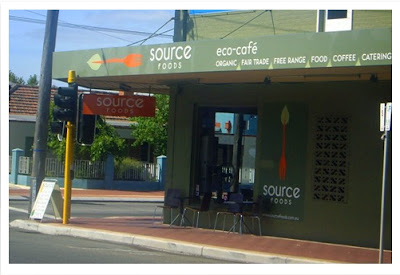 This weekend I visited Source, which is a cafe in the inner suburbs of Perth that Tom and I have been frequenting since it was opened by a friend of ours a few years ago. That friend recently sold the business, but fortunately the new owners haven't changed much, and the food is still excellent. Source is "committed to providing fresh, tasty food, coffee & juice options with minimal ecological impact," which means that they try to maximise the amount of fresh, local, and organic ingredients in their products. They also provide heaps of options for vegans, vegetarians, and those who are gluten-intolerant. All of this is good, but this blog is about hommus, so let's talk about that. 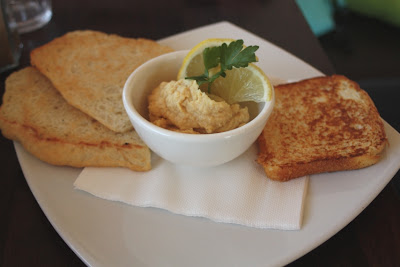 I tried Source's hommus with a toasted panini, and it was just about perfect. The hommus is very fresh-tasting, and has a very nutty chickpea flavour. The garlic is very understated, which I think is good for such a mild hommus. Interestingly there's no tahini here, which makes for a much lighter flavour, and is a feature of another fantastic cafe hommus that we'll be reviewing soon. Maybe there's something to this no-tahini idea. Because this is a freshly-made hommus, there's no need for preservatives like vinegar or (loads of) salt, so there's a really delicious lightness to it.

Texture-wise, the hommus is very solid. I'd guess that this is because in the cafe they use hommus to spread on bread for a couple of the cooked breakfast dishes, and the fantastic tempeh burger. A runnier hommus probably wouldn't work for that sort of use. 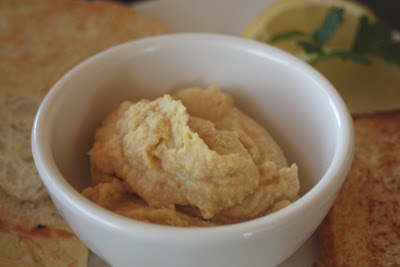 Overall, this is one of my favourite hommuses, and I'll be asking for it again. The only problem is that the dish as I had it - just a bowl of hommus with a lemon wedge and toasted panini - isn't on the menu! Hopefully the next menu update will change that.

Posted by Matt Harken at 3:47 AM No comments: 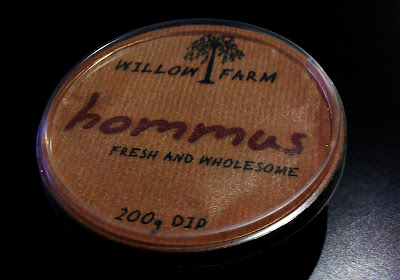 Willow Farm hommus is available at my local Woolworths, which is a good start. The packaging is nice and simple, and the plastic tub is transparent so you can see the colour of the hommus. The consistency is really good, probably a bit runnier than Chris' which I think is more like a dip. To me hommus should be slightly runny, not so much that you can't get a decent amount on a cracker or chip, but it shouldn't be firm enough to hold an outline of whatever gets dipped in it.

The hommus tastes really good, and it has a strong savoury flavour from the tahini and vinegar. I really hate any hint of sugary sweetness in my hommus, so this is great for me. The garlic is very mild, and there's not much lemon flavour in it. The vinegar is a good addition and I'll be looking out for it in other hommuses.

I enjoyed Willow Farm hommus with some water crackers and some home-pickled jalapenos, and it was really good. I enjoyed it more the more I ate. A strong challenger to Chris' as my go-to supermarket hommus. Not the best hommus in the world, but it could be the best hommus available at a national supermarket chain.

This 200g tub was about $3, which is really good value by Australian supermarket standards, but still doesn't beat the 500g Chris' tubs for value.

So here is the first hommus of many that I will be reviewing on this blog.
I've put the blog together due to my love of hommus. Hopefully it well help people to find the right hommus for them. 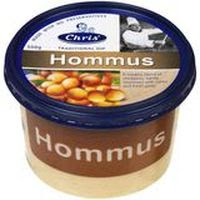 Chris' Traditional Hommus is a an easily accessible product available at most major supermarkets. It has a very smooth and creamy texture but still manages to have the strong chickpea and tahini flavour, with a hint of garlic. When I first started purchasing this hommus in bulk amounts I was living in a share house with 2 fellow vegan/vegetarians and we used to buy at least 2kg's of it each food shop. It goes perfectly with a nice dose of Tabasco sauce, or any other hot chilli alternative and a packet of water crackers or a few Turkish bread rolls.
This isn't a gourmet expensive hommus you'll find at a deli or in a boutique supermarket but is one I'd recommend.
You can buy it for around $5 per 500gm tub. This makes it a very affordable product to throw into your shopping trolley next food shop.
For availability, taste, and price I'd give Chris' Traditional Hommus 3.5 chickpeas out of 5. 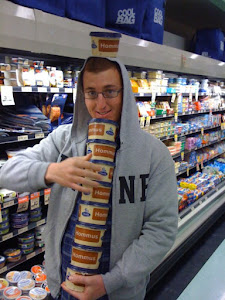 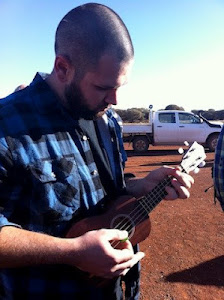